The local media had been drumming up on Pope Francis months before his apostolic visit to our country. Media heads told us that the pope once had a girlfriend, that he dances tango, and that he said the top adage of modern men: "Who am I to judge?". I even heard Boy Abunda claim that the Pope is supportive of the LGBT community and same-sex union.

The media tells us that Pope Francis is down-to-earth and a revolutionary, which (they say) the very "opposite" of his predecessor. Pope Francis, the fluffiest pope ever, will "update" the Church's teachings on contraception and marriage.

Well, the local media is wrong. Pope Francis is a Catholic pope and these 5 quotes that he made during his apostolic visit in the Philippines shatter the false image that they made for him.

1. Every Child is a Gift 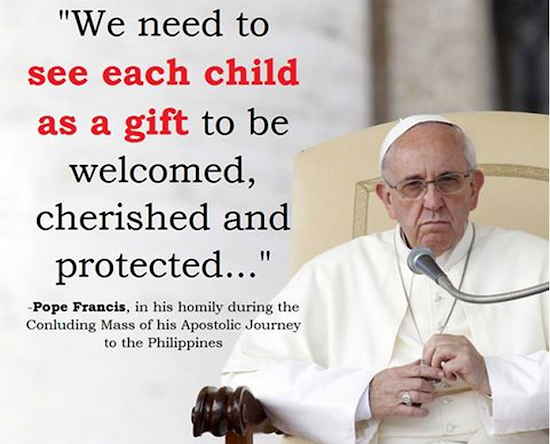 This can be read as a rebuke to some groups that are pushing for the legalization of abortion in the Philippines. These people treat children as burden and they want them killed in the womb. These pro-abortion folks would rather want poor children die than instead of removing corruption and social inequality.

2. From Conception to Natural Death 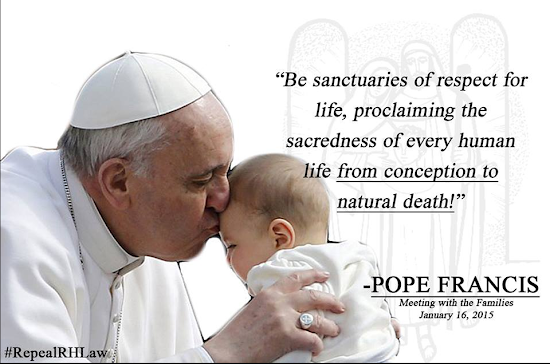 The world is so perverted now that some nations have euthanasia. People with twisted minds not only want babies to be aborted but also want people to kill themselves.

3. The Family is Threatened 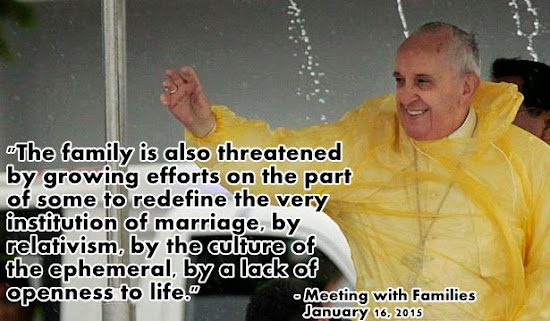 The Reproductive Health Law (RH Law) promotes the lack to openness to life that Pope Francis warned about. Now, the Filipino family is now being threatened by the redefinition of marriage through legalization of divorce and same-sex unions. The local media is at the front line in promoting these threats to the family and they even made us believe that the Pope is supportive of these. Well, this quote from the Pope proved them wrong.

4. Sexuality, Marriage, and Family are Under Attack 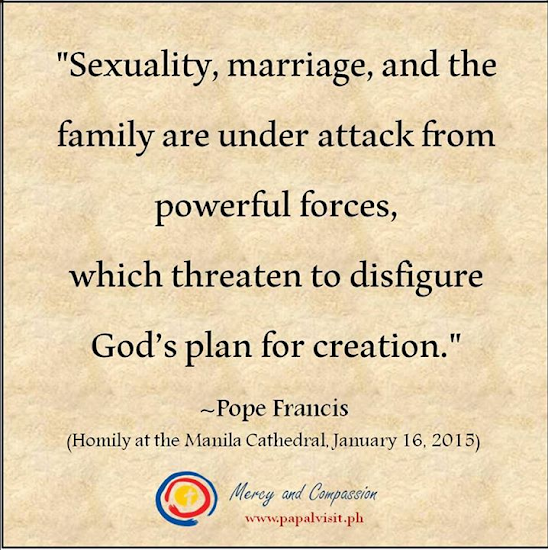 The push for the RH Law gave us the glimpse of the powerful forces that the Pope spoke about. They are powerful because they have the money, political powers, and worldly influence. Yes, they are people and organizations but their intent of promoting evil teachings points us to a more powerful person: Satan. There's no other being that is so motivated to destroy the family and humanity other than the Father of Lies. 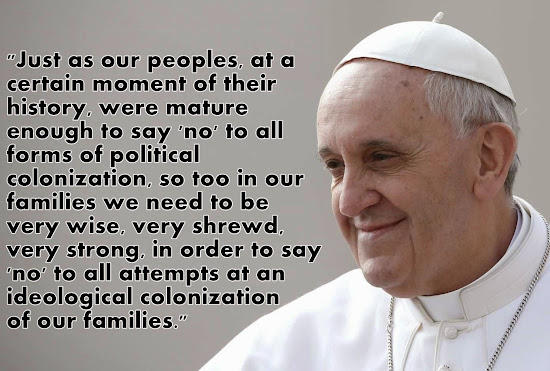 So how can Filipinos defend the family? Pope Francis' answer: "say 'no' to all attempts of ideological colonization".

Ideological colonization are ideologies that bring men away from the truth, thus imprisoning them in lies of that destroys the family and humanity.

Pope Francis made a deep mark to the hearts of the Filipino people during his 4-day apostolic visit to our country.  Pinoys watched his every move and listened to every words her said. I can only hope that we truly listened to his messages and apply them to our lives and society. Finally, I hope that the local media stop in making the pope fit their worldly agenda. Pope Francis is Catholic and he will not deviate from Jesus' teachings regarding the family and sanctity of human life.

Some of the images in this post were obtained from Twitter #RepealRHLaw. Credit goes to those who made these posters.
Posted by Ishmael F. Ahab at 11:00 PM

Comments are very much welcome. However, I reserve the right to disapprove comments that are spam, not relevant to the blog post, or were just made to make hurtful (trollish) remarks.