Dressing Them Up into Little Women

There is something that many Filipinos consider to be cute but which I find disconcerting. That something may be summarized by this:

It seems like more and more parents are dressing their little girls with grown-up clothes. I've seen little girls dressed in spaghetti straps, or in mini-skirts, or in small shirts that show their belly button. I've even seen some little girls wearing make-up!

Making little girls wear the Sex Bomb outfits is not inherently evil but it shows how their parents think. It shows how modern mothers and fathers value the innocence of their children.

I believe that children should act like children as long as their age allows it. Being a little child is a one time event and it can never be regained once its gone. Thus, it is the duty of parents to protect their children's innocence and keep them away from influences that can poison their minds.

It is hard to keep children away from the poisons of the modern world. The corruption wrought by Sexual Revolution was already ingrained in our society. Thus we have the showbusiness that cheapens love into sexual affairs. Thus we have advertisers who use sexual innuendos to sell products. And on and on and on.

Modesty is the first thing that was thrown away at the onset of Sexual Revolution. The long skirts gave way to ultra-mini skirts. The neckline that is actually set on the neck is now plunging just above the breasts. Even some of the clothes today are made of see-through cloths.

The current generation of mothers and fathers already swallowed the corrupt fruits of Sexual Revolution. That's why it is not surprising that they are the first ones to dress their daughters as strippers.

This immodest fashion trend for children's clothing is just the tip of the iceberg. I can still recall my online “fistfight” on Facebook regarding a McDonalds ad that featured two little children in a courting scene. And yes, many people also find the ad very cute.

This post is an entry for Filipinos for Life July 2013 Blogging Event. 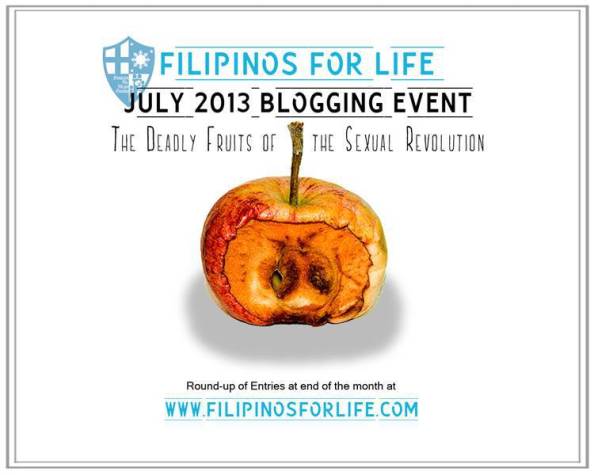