Lipa Archbishop Ramon Arguelles is under attack due to his alleged comment that the destruction brought by Typhoon Yolanda was caused by the RH Law.

Admins and supporters of the One Million Voices Against CBCP Facebook Page (which should actually named as 3000+ little voices against CBCP) are spreading this poster: 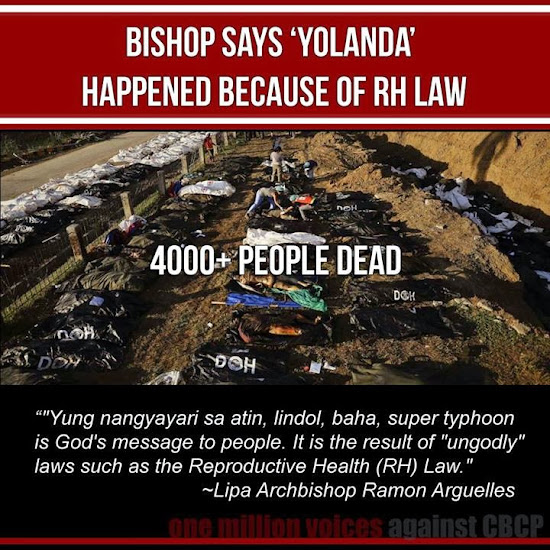 Their poster claimed that Archbishop Arguelles said the following:

“Yung nangyayari sa atin, lindol, baha, super typhoon is God's message to people. It is the result of "ungodly" laws such as the Reproductive Health (RH) Law”

I gave the poster-makers the benefit of the doubt and googled the made-up quote. This is the result: 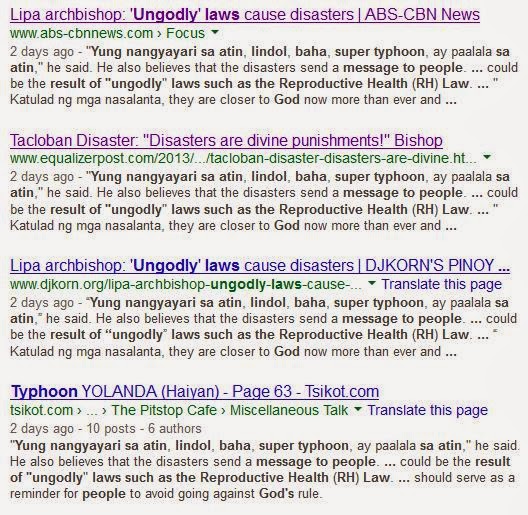 It is obvious that they have no other source for their made-up quote. The Google search even exposed their lies.

I even posted my objective research to the  One Million Voices Against CBCP FB Page but this what I got:

It seems like these people are allergic to the truth, especially if the truth is against their hate-filled beliefs.

Well, at least I learned a lesson and that is to be more careful in dealing with Church-haters because they will lie and lie just to justify their hate.

UPDATE: It seems like the admin of  One Million Voices Against CBCP FB Page blocked my comment. This is another proof that they are lying.
Posted by Ishmael F. Ahab at 11:17 AM No comments: